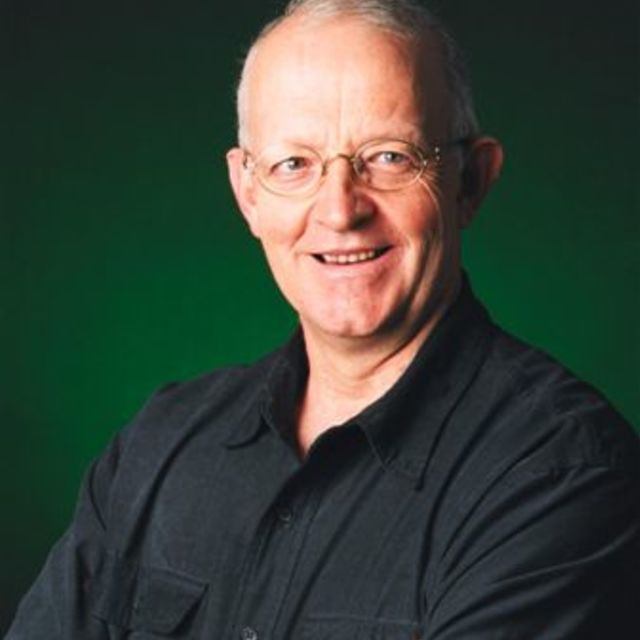 David is a New Zealander, born and brought up in Auckland.  He gained his Bachelor of Music in 1971 and left for England to further his studies at the Guildhall School of Music in London. On his return to New Zealand he completed his Master of Music 1st class Hons. in 1973. Early successes came with winning the John Cowie Reid competition for a composition in 1973 with Improperia for 8 part choir and tenor soloist, and a tour made by the Dorian choir under Peter Godfrey with performances of Five Credo Extracts throughout Europe. The Dorian choir again toured in 1975 and presented David’s Salve Regina for 16 part choir at the London Proms series and Beata Virgo for 12 part choir at the Three Choirs Festival in Chichester.

While in England in 1980 David wrote The Discovery for up to 16 voice parts and four soloists. This work was presented that year at the Paris International Rostrum of Composers. Under the baton of Karen Grylls, the New Zealand National Youth Choir made several tours and often performed Griffiths’ works.  His Lie Deep my Love cycle was included as part of their winning the Choir of the World award in Wales 1999. His Beata Virgo has become internationally popular.

Further international successes included a tour by Bach Musica in 2000 when his Stabat Mater for choir, soloists and string orchestra was performed throughout Germany. In May 2002 his commissioned work, Te Deum for 12 part choir was premiered by Opus & Choral Ensemble in Seattle USA under the direction of Loren Poten.

Since this time Griffiths has had a steady list of commissions from schools and has had many pieces performed in the Big Sing Choral Festival. Included in the early part of the new millennia are The Servant for choir, soloists and two string quartets and five Operas for the University of Waikato. The Woman from Moab, Three Franks, The White Lady, Mary Müller – The Secret Suffragist and The Walls of Troy.

A CD of Griffiths song cycles was launched in July 2008 on the Atoll Label including Five Love Songs, Shoriken and Charms and Knots sung by the composer.  An earlier CD, Ahi, also released by Atoll, included his Six Watercolours.

In 2011 and 2012 Griffiths wrote a number of pieces for the Italian group, Associazione Culturale Colle Ionci. Hymn for the Music on Volcanic Lakes Festival, Pane Vero for the Infiorata Festival in Genzano di Roma, Cantico del Sole, Gorgon for saxophone quartet and Lo Nemi for the Italian choir Chantharmony.  Two other works with Italian connections ensued – Coquettes for piano duo, written for Sara and Massimo Perciacante, and Kapowairua, an extended piece in four movements for soprano saxophone and piano for the Italian duo ‘Colorduo’.

In February 2013 Griffiths completed his opera in Italian, Il Coligola Riflesso for wind septet, brass quintet, percussion and strings.  The libretto was by Maria Lanciotti and describes Caligula’s torturous descent into insanity.

A Child is Born

for SSSAA choir and piano

A View of Rangitoto

Blessed Jesu at Thy Word

for SATB choir and soprano soloist

for baritone and piano, 13m

Dead on the Tree

for tenor and piano, 11m

I will lift mine eyes

for SSAA choir and flute

for eight-part choir with soprano or tenor soloist, 9m

Jesus the First Born of Creation

for SATB choir with soprano and baritone soloists

for SATB choir and soloists, 11m

for SATB with soprano and alto solos, 8m

May God be Gracious unto Us, and Bless Us

Parable of the Vineyard

for baritone and orchestra, 12m

for SATB choir and orchestra, 9m

for tenor and piano, 18m

Sing to the Lord a New Song

for SATB choir and percussion, 3m

for voice, clarinet in B flat, cello and piano

Sonata for horn and piano

for choir and ensemble, 10m

for SATB choir and organ, 12m

for two-part choir and piano

Sun Shower and other pieces for piano

for SATB choir with soloists, 9m

The Girl who Stayed at Home

The Servant
The Spirit of God

The Temple
The Walls of Troy
The White Lady
Three Canons

Views of the Inlet