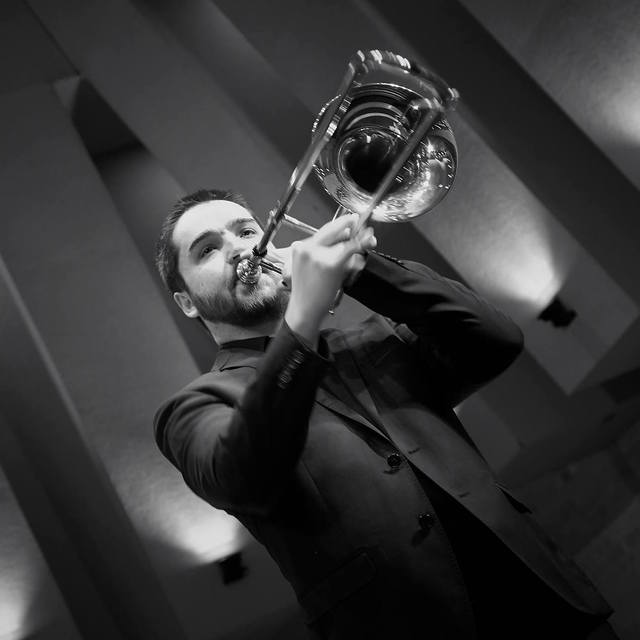 When a two year old is taken to a brass band concert, it is unsurprising that his attention is drawn to the longest, slidiest, loudest instrument on the stage. For better or for worse, it was at this time that the said two year old was asked which instrument he would like to learn some day in the near future. A karmic retribution from having a good laugh at a rather odd and silly instrument, Dale Vail is now a New Zealand Trombonist and Composer.

Dale's musical life to date has seen him extremely active in the New Zealand Brass community, in bands, orchestras and as a soloist. His involvement across the spectrum of musical genres has given Dale a drive to use multiple genres or musical techniques to create unique performances of his own. This often becomes an outlet for Dale's interests in how science and human beliefs can be linked, which is a theme that appears in many of Dale's compositions and repertoire choices.

Dale became a student at the New Zealand School of Music in Wellington, where he was awarded the Director of Music’s Choice Scholarship in his opening year, and graduated with 1st class honours.

During the four years he spent at NZSM, Dale became very involved in local ensembles, including the Royal New Zealand Air Force Band, Orchestra Wellington, and the Wellington Brass Band. He also began his own New Orleans Jazz group called the Brass Bandits, who became a familiar sight on the streets of Wellington. As a soloist, Dale won several awards, including the NZSM Brass Player of the Year three times, became the National Brass Band Trombone Champion of New Zealand in twice, and also won the Gisborne International Brass Prize in thrice.

Following his studies in Wellington, Dale moved to Melbourne where he spent two years studying at the Australian National Academy of Music, where he was awarded the "outstanding programme in a recital" for his recital featuring 5 original compositions featuring the Trombone.

Dale is currently working with the Sydney Symphony Orchestra through the Fellowship program, whilst also working towards a research masters in composing new works for the trombone through the Griffith University of Queensland. Despite his first choice of specialisation as an orchestral trombonist, Dale can be found working regularly with New Zealand and Australian brass bands as a performer, conductor and composer, and holds these roots close to his heart.