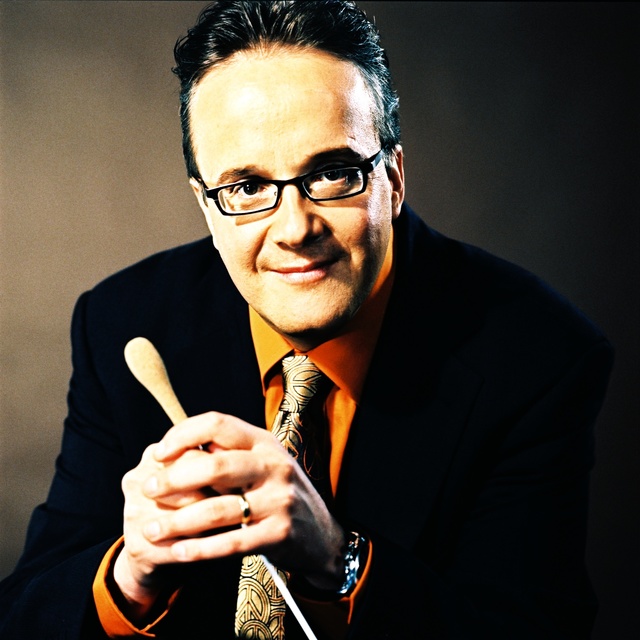 Celebrated for his “magnificent contribution as Music Director” by The Press, lauded as “a real interpreter of boldly romantic inclinations” by the Dominion Post and singled out for his “intensity, commitment and attention to detail” by the Capital times, conductor Marc Taddei was appointed Music Director of Orchestra Wellington in 2007. His zest for creating engaging, erudite and innovative programmes, combined with his close audience connection has won for him an unsurpassed public following and continuing critical acclaim.

Marc frequently conducts every professional orchestra in New Zealand and is also the Music Director of Vallejo Symphony Orchestra in California. He regularly works with the national ballet and opera companies and the International Festival of the Arts. Outside of New Zealand, Marc is routinely re-invited to guest conduct the major Australian orchestras and returns every year to conduct in the United States. He made his debut with the New York City Ballet in late 2012 and was immediately invited to conduct a full season the following year. Recent debuts include performances with the Hong Kong Philharmonic, Hong Kong Sinfonietta, and the Xiamen Symphony Orchestra in China.

His work in Vallejo and Wellington follows a highly successful tenure as music director of the Christchurch Symphony. He has also conducted the Queensland, Sydney, Melbourne, Tasmanian, Canberra, Adelaide and West Australian Symphony Orchestras, Orchestra Victoria, the New Zealand Symphony Orchestra, the Auckland Philharmonia, the City Chamber Orchestra of Hong Kong, the Hong Kong Sinfonietta, and the Silesian State Opera in the Czech Republic. In the United States, he has conducted the Richmond Symphony, the Louisiana Philharmonic, the Oregon, Fort Worth and New Haven Symphony Orchestras, the Eugene and Springfield Symphony Orchestras, and the Southwest Florida Symphony. He has also conducted for the New York City Ballet, San Francisco Ballet, Opera New Zealand, the Hong Kong Ballet, the Royal New Zealand Ballet and has been a frequent presence at the New Zealand International Festival of the Arts. His performance with the Louisiana Philharmonic was nominated for best Contemporary Classical Performance of the year at the 12th annual Tribute to the Classical Arts in New Orleans.

Marc’s impressive discography includes over thirty recordings on the Sony, BMG, Koch, Columbia, ABC Classics, Trust, ASV, Universal, Rattle, Atoll, Concordance, and Kiwi Pacific labels, and many of his discs are featured in streaming audio on the Naxos music library web site. Recent recording activity includes the soundtrack on Waxwork Records to the Legendary Pictures production of Krampus, and a recording of Beethoven’s first and third symphonies on the Concordance label.

Marc’s successes as a recording artist are informed by his work in the industry as a conductor, soloist, orchestral musician and as a producer. His release of British viola concertos with Helen Callus and the New Zealand Symphony Orchestra received rave reviews in Gramophone, Classic FM, and Strad magazines and Music Web International and Classic FM listed the CD as recording of the month.

His Rattle CD, View From Olympus was awarded Classical Album of the Year in 2007 at the Vodafone New Zealand Music Awards and spent an unprecedented nine months at #1 in the classical music charts. It was specially featured by Jim Svejda on KUSC-FM in the United States, and on his nationally syndicated programme, The Record Shelf. Marc’s SONY recording with the Christchurch Symphony went double platinum in 2004. More recently his Atoll CD, Holocaust Requiem won the 2012 Pizzicato Magazine (Luxembourg) Supersonic Award. Other special recognition for his recordings includes publications as diverse as Sequenza 21, American Record Guide, Strad Magazine and Music.Dish.com (Editor’s Pick).

Marc has conducted for Hollywood and international movie productions including Krampus, King Kong, Under the Mountain, No.2, and Dean Spanley. He also conducted the soundtrack to Britain’s Channel 4 film, Wagner’s Ring, which won the prestigious Prix de Basle Special Jury Award for the “most outstanding contribution to European culture in television”.

He has conducted for television producers such as C4 productions in the UK and New Zealand, FOX Television, TVNZ and TV3 in New Zealand. Marc’s appearances on television have included live performances with Dame Kiri Te Kanawa, Young Musician of the Year, Last Night of the Proms, and a children’s television special entitled “Baby Proms” which introduces preschool children and their caregivers to the joys of the orchestra. A special televised performance of Vaughn Williams Symphony Antarctica featuring Sir Edmund Hillary as narrator was broadcast live via satellite to Scott Base in the Antarctic in a world first in 2005.

In 2011 Marc conducted the NZSO in music for the innovative software package Booktrack which featured music of John Psathas accompanying Salman Rushdie’s short story, “In the South”.

An advocate of new media in performance, and extra-musical collaboration as a means of enriching the artistic experience, Marc has worked with many of New Zealand’s finest composers and visual artists in groundbreaking orchestral and visual collaborations that have energized audiences. One such collaboration, entitled Southern Journeys, was released by Natural History New Zealand as a DVD in 2002.

Marc is a graduate of the Julliard School in Manhattan, where he received both bachelors and masters degrees before moving to New Zealand. He divides his time between San Francisco, Wellington and beautiful Wanaka, New Zealand.

Live at the Proms