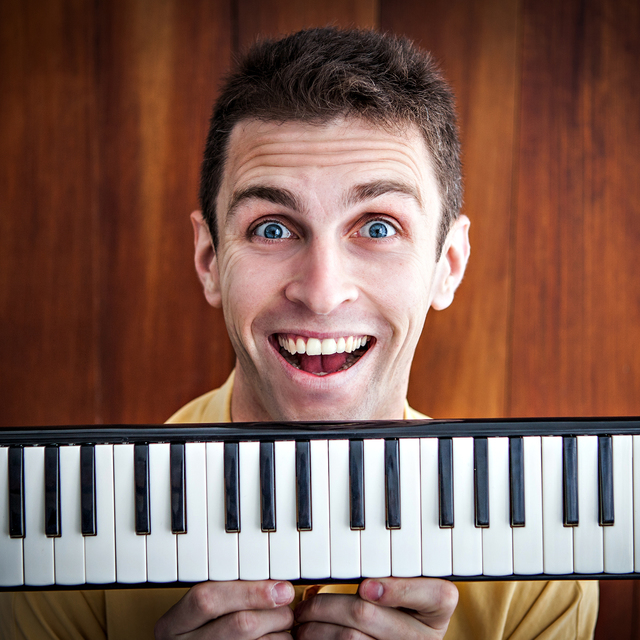 Robbie Ellis is a composer, music director, broadcaster, comedy songmaker, and other.

Born on Auckland’s North Shore, he studied Composition at the University of Auckland with Eve de Castro-Robinson, John Elmsly and John Coulter. He’s had works performed by the New Zealand Symphony Orchestra, the Auckland Philharmonia Orchestra, Saxcess, 175 East, the Jade String Quartet, Classical Revolution Chicago, and a host of other ensembles. He was the University of Otago Mozart Fellow in 2012, as well as the Auckland Youth Orchestra Composer-in-Residence.

Robbie is also a comedy songmaker: he has released an album, Pumpkins, on which he orchestrated his songs for members of the Christchurch Symphony Orchestra. He performs his songs from the piano in cabaret, sketch and stand-up comedy settings.

He presents and produces classical music radio. He got his start with RNZ Concert in Wellington and Auckland, winning two New Zealand Radio Awards for feature programmes about the NZSO. He now works for 98.7 WFMT in Chicago.

He’s also a music director for improv, sketch comedy and musical theatre: he’s written several original musicals, countless sketch shows, and played probably thousands of improv performances. He now lives in Chicago where he performs and teaches at a bunch of venues including the legendary Second City.

for baritone and piano, 3m

for a whole bunch of wind & brass, 5m

for two actor-singers and piano

for SATB quartet or choir, 3m

a song for voice and orchestra, 3m

a song for voice and piano, 3m

Cause I Couldn't Find a Tenor

for tenor, baritone, and piano, 30s

a scene for mezzo-soprano, tenor, and piano, 5m

Fanfare of the Earth

for violin and cello, 30s

I am a Cat

If Zack de la Rocha were a twelve-tone serialist composer

It Doesn't Go Up

Love is a Four-Letter Word

a song for voice and orchestra, 11m

for musical performer(s) numbering between 1 and ∞ inclusive and some munter in the audience, 30s

for voice and orchestra with surprise cello reveal, 3m 30s

Sonatina for alto saxophone and piano

for alto saxophone and piano, 9m

Sonatina for clarinet and piano

for clarinet and piano, 17m

Sonatina for violin and piano

Symphony No 1 in Eb

Symphony No 1 in Eb

a song for voice and orchestra, 4m

The Ancient Thracian God of 'Huh?'

for soprano and continuo, 4m

for orchestra and actor, 11m

The Miracle of Creation

for pregnant soprano and piano, 5m

Tomorrow is a Feast Day

Your Concern is Noted

Robbie Ellis talks about his "Relish in Immature Bombast"

Robbie Ellis | The Mid-30s Guide to the Orchestra

On a return visit from the USA, Robbie performs a solo set of his new comedy songs.