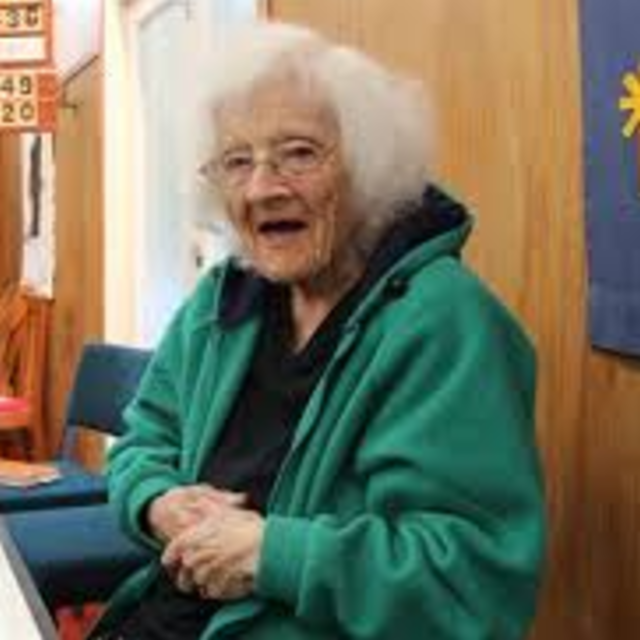 Margaret Wegener was born in North-west London in 1920 and began composing as a child, continuing composition into her late 80s. After studying at Maria Grey College she qualified as a teacher, eventually holding posts as Director of Music at Barton Court School, Canterbury, and at Ellington Girls' School in Ramsgate. She retired in 1980 to devote more time to composition. She also held positions as organist/choir director in London, Peterborough, Canterbury and Shropshire.

Margaret's compositions have been published by OUP (Oxford University Press), Royal School of Church Music, Da Capo Music and Musica Ariosa, and have drawn praise from composers such as Ralph Vaughan Williams, Herbert Howells, John Rutter and Andrew Carter. She was awarded composition prizes in UK and Canada and while in England she released three CDs of her music: Songs (featuring renowned English baritone Stephen Varcoe); Choral music; and Chamber music. At least one of her CD covers features her own art work.

In 2005 Margaret immigrated to New Zealand to live with her daughter near Auckland, where she continued to compose and to promote her music. New Zealand musicians who have performed her works include Waitakere City Orchestra (dir. Brigid Bisley), Musica Sacra (dir. Indra Hughes), Cantorum (dir. Iain Tetley), Margo Knightbridge, The Three Mezzos, Ben Hoadley, William Green, members of the Auckland Philharmonia Orchestra, and members of Auckland Lieder Group. She also released a fourth CD, of orchestral music, conducted by Hamish McKeich and featuring Cameron Barclay (of the Ten Tenors).

A Sympathy With Sounds

All Sounds Have Been As Music

for mezzo soprano and piano, 4m

All Sounds Have Been As Music

for baritone and piano, 4m

As Truly as God is our Father

for unison or SATB choir with piano or organ

for oboe and piano, 3m

Carol of the Angel Gabriel

Cascade on a Ground Bass

for clarinet and piano, 4m

I am the Light of the World

for SATB choir with piano or organ

I Know a Bank

Inscription for a Wayside Spring

for soprano, oboe and harp, 6m

Look Not In My Eyes

Ode to a Nightingale

for solo soprano (or tenor) and strings

Since Singing Is So Good A Thing

for violoncello and piano, 12m

Take, Oh, Take Those Lips Away

The Holy Son of God

The Holy Son of God

for high voice and piano

The Prayer of Saint Francis of Assisi

for chorus and orchestra, 9m

for bassoon and piano, 3m

for flute and clarinet in A

What You Gona Call Yo Pretty Little Baby?

arranged by Margaret Wegener for unison chorus with optional descant

What You Gona Call Yo Pretty Little Baby?

arranged by Margaret Wegener for unison chorus with optional descant

Margaret Wegener: A Sympathy With Sounds

Margaret Wegener: Music To My Listening

Margaret Wegener: The Piper of Dreams