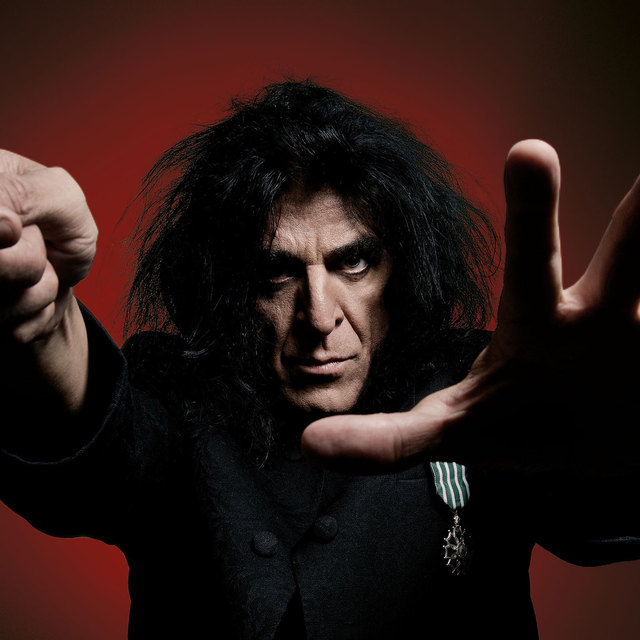 Jeremy "Jaz" Coleman is a musician, composer, singer-songwriter, record producer, lecturer, traveller, philosopher, actor and decorated Chevalier des Arts et des Lettres (Knighted by the French Minister of Culture). He came to prominence in the early 1980s as the lead vocalist, songwriter and keyboardist of post punk group Killing Joke. Coleman’s career is one of the music industry’s most diverse, oscillating between the white heat of Killing Joke and the world’s symphony orchestras.

Known for his unique raspy voice and intense stage presence (occasionally appearing wearing face makeup), Bill Janovitz, writer for the website All Music described Coleman's stage presence and voice as "almost always full-on in his approach, with a terrifying growl of a voice that is similar to that of Motorhead’s Lemmy.”

Coleman’s musical path forked following a gig 1982—he travelled to Iceland and announced his intention to become a classical composer. Ten years of studying and ongoing Killing Joke involvement later, he commenced conducting and worked with some of the world's leading orchestras.

During that time, Coleman would fly to Berlin bi-annually to meet and watch renowned Austrian composer Herbert Von Karajan conducting. Coleman then relocated to Leipzig DDR in 1987, where he briefly studied under Kurt Masur before traveling to Russia where he apprenticed with Hungarian composer, Dr. Peter Saunders. The money Coleman received from Killing Joke supported his studies with Saunders.

Coleman muses, “back in the 1980’s, it was 100 English pounds for a 45-minute lesson under Saunders, and I’d do two lots of them. He made me stand throughout those lessons so I could receive the info a lot better, your mind is more receptive that way with all the cerebral activity while standing.”

Coleman then began an extensive study of Arabic quartertones at the Arabic Conservatoire. This culminated in the 1990 recording of his first purely instrumental / classical album ‘Songs from The Victorious City’ co-composed with Anne Dudley (Art of Noise), using the master players of Cairo. It is formally classified as World Music, but is primarily composed of a mixture of Middle Eastern folk mixed with western pop-oriented themes.

In late 1989 Coleman then scored Symphony No.1 ‘Idavoll’ reviewed by the late East German conductor Klaus Tennstedt who endorsed it referring to Coleman as ‘our new Mahler’.

In 1995, Coleman released his first of three albums of symphonic rock music: ‘Us and Them: Symphonic Pink Floyd’, which peaked at number one in the Billboard Top Classical Crossover Albums Chart for 35 weeks; and ‘Kashmir: Symphonic Led Zeppelin’ – both written and produced by Coleman and with Peter Scholes conducting the London Philharmonic Orchestra. In 1999, he produced and arranged an album of The Doors material, performed Nigel Kennedy and the Prague Symphony Orchestra, titled ‘Riders on the Storm: The Doors Concerto’ released in 2000 on Decca Records.

Coleman and Hinewehi Mohi formed Oceania (with Hirini Melbourne and many others) and recorded the contemporary Te Reo Maori self-titled album ‘Oceania’ on Universal Records. The record went double platinum in New Zealand and showcased the diverse culture of New Zealand to an international market. The song ‘Pukaea’ appeared in the film Year of the Devil (2002). Oceania II, the follow up album was then released in 2002.

In 2001, Coleman was commissioned by the Royal Opera House in Covent Garden London for his first large scale opera entitled ‘The Marriage at Cana’ – which in essence is the Gnostic theme of Jesus Christ and the Mary Magdalene, and her subsequent exile to Provence (predating Dan Brown's 'The Da Vinci Code'). World-renowned genealogist Sir Laurence Gardner, author of the controversial bestseller, ‘Bloodline of the Holy Grail’, composed the libretto. The celebrated oil-on-canvas artist Andrew Jones exhibited the original painted nine acts of the opera at the premiere. Also commissioned by the Royal Opera House was Coleman's ‘Unwanted’, a concerto grosso for violin, viola and string orchestra whose theme portrays the plight of the Romany people of central Europe.

In April 2002, Coleman received an outstanding three Andel Awards and quadruple platinum sales for his concerto for Czech folk group Cechomor orchestra entitled ‘Promeny’ which was also the soundtrack to the Czech film ‘Year of the Devil’ with Coleman starring in the lead role. 2003 saw ‘Promeny’ performed at 10,000-15,000-seat auditoriums throughout the Czech Republic and Slovakia.

On 22 March 2003, Coleman was commissioned by the Institute for Complex Adaptive Matter (ICAM) to compose a three-part concerto ‘Music of the Quantum’, expressing the ideas of the quantum and emergence in musical form. Co-produced with his elder brother Piers Coleman (born 13 February 1958) who is a condensed matter physicist at Rutgers University; the event was performed at Columbia University, with a spectacular response. It was repeated the following year at Bethlehem Chapel in Prague.

Also in 2003, Coleman completed a second work with Nigel Kennedy and the Kroke Trio in the role of producer of their album, ‘East Meets East’, released through EMI Classics.

In early 2006 Joseph McManners performed Coleman's ‘Daughter of England’ at the Royal Albert Hall, London with the Royal Philharmonic to standing ovation.

In June 2007, Coleman collaborated with over 150 youth musicians in the Contemporary Youth Orchestra, based in Cleveland, Ohio, to perform the entirety of ‘Kashmir: Symphonic Led Zeppelin’ along with additional orchestrations of Led Zeppelin's music.

In 2009, Coleman recorded three tracks of the ‘Nirvana Symphonic’ with the Prague Philharmonic Orchestra, and played summer festivals across Europe with Killing Joke. In December, Coleman's ‘Us and Them: Symphonic Pink Floyd’ was performed at the Berlin Konzerthaus for the 20th anniversary of the fall of the Wall.

In 2010, Coleman completed his ‘Magna Suscitatio’ for solo violin, chorus and full orchestra, which illustrates the process of transformation and illumination of the human condition from our current barbaric state.

2013 – ‘The Island Symphony No 2’ - recorded with the Auckland Philharmonia Orchestra was independently released and later reissued in 2020. Coleman also independently released his first book ‘Letters From Cythera’ a deep dive into occult sciences, metaphysics and the renaissance principles which have influenced his musical journey.

In 2014, Coleman began the year by scoring, writing and conducting the NSO Symphony Orchestra (UAE), for the opening music and ceremony of the Dubai World Cup broadcast to over 160 countries. Later that year, Coleman recorded with the Moscow State Film Orchestra and performed ‘Kashmir: Symphonic Led Zeppelin’ near St Petersburg at Gatchina Palace for the White Night Gala with the Minsk Philharmonic. Also in 2014, ‘Us and Them: Symphonic Pink Floyd’ was performed by the Melbourne Ballet Orchestra on 22 October and 1 November.

On 28 February 2016, Coleman gave a spoken-word performance in Auckland, titled ‘Going Over to the Dark Side', a light- hearted look at the state of world affairs by the Dark Lord. Later in the year, the ‘Doors Concerto’ was performed at the White Nights Festival in Saint Petersburg, Russia.

2016 also saw the release of the Levee Walkers, a collaboration between Coleman, Duff McKagan from Guns & Roses and Pearl Jam guitarist Mike McCready. McKagan stipulated who and what a Levee Walker is: "To become a Levee Walker you must have at least 25 years of musical experience, survived battles with the forces of darkness, and perhaps even kissed death on the cheek. More importantly, there must exist a deep reverence for the music of your comrades, and the commitment they made to this hardest of paths."

Released globally through Spinefarm Records, this is the first release in the MASTERSCORE Series. This stirring body of work taps into the more melodic, uplifting aspects of the Killing Joke musical canon, using Coleman’s ongoing journey with this hugely influential UK outfit, as the consummate vehicle for a Gnostic Mass (a ritualized celebration of the mysteries of existence).

‘Magna Invocatio’ debuted at #15 on Classic FM and #13 UK Classical Music Charts. The video for the track ‘The Raven King’ was also released on 29th November 2019.

In July 2020; Black and Red – a collaboration with didgeridoo player Ondrej Smeykal, released their debut single ‘On The Day The Earth Went Mad’.

Black and Red is also the presentation of Coleman's project about the phenomenon of electromagnetic Earth grid. This basic connection is important in communication among human, earth and universe, which is present in urbanism or culture of all ancient civilization.

The controversial video for ‘On The Day The Earth Went Mad’ debuted at #2 on Vive Le Rock Top 20 vídeos for 2020.

2021 has also seen Coleman sign to Decca Records for three classical albums, sign to The Hamilton Agency for literature, release his own line of hot sauces and launching a business creating his own pies.

With over 50 diverse recordings to his name, and album sales well into the millions, Coleman’s double current musical path is living music history.

for string quartet with piano and percussion, 8m 15s