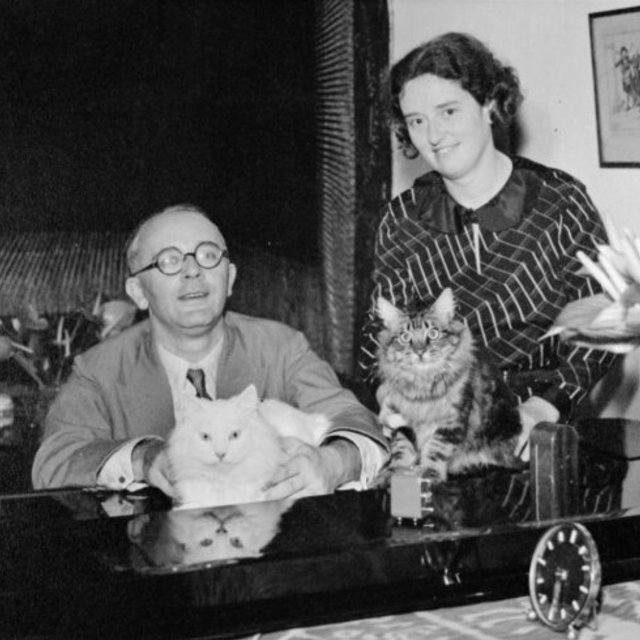 Born in Vienna, Paul Schramm showed precocious musical talent from a young age, making his debut as pianist, conductor, and composer at the age of eight. Prior to the First World War he was touring Europe as a solo pianist and teaching. His piano students included Claudio Arrau, who went on to become a world-famous concert pianist.

Married in 1916, he divorced in 1927 shortly after meeting Dutch pianist Diny Soetermeer. They married in 1928. They formed a successful piano duo, touring and performing on the radio. Schramm developed an interest in Jazz (or what Europeans thought of as Jazz) and many of his compositions are jazz-influenced. Disheartened by the change of political events in Europe the couple decided to stay in Indonesia (Dutch East Indies) during one of their tours to the East, however they found the humid climate oppressive and so, on a tour of Australia and New Zealand in 1937, they decided that Wellington was a better environment for them and moved there.

They began performing in schools, and Schramm wrote music for the National Film Unit. However the out-break of World War Two seriously curtailed their musical activity. As ‘enemy aliens’ they were banned from broadcasting. To earn money Schramm began driving taxis until his licence was revoked and he was forced into factory work. In 1946 his application for naturalisation was declined ostensibly on the grounds that he hadn’t bought war bonds.

He left New Zealand in 1948 in the hopes of reviving his solo career, moving to Australia, leaving behind his wife and son. He never returned to New Zealand, and died in a motor vehicle accident in 1953, having become a travelling salesman for underwear and hosiery. Schramm is just one example of the many European musicians who arrived in New Zealand to find a not-so-warm welcome.

A champion of new music, performing Debussy, Prokofiev, Stravinsky and Gershwin within a few years of their publication, Schramm also composed music throughout his lifetime. During the First World War he wrote mainly piano and chamber works in a late romantic style, some of which were published but many are lost. Upon returning to regular composition in 1924, he focused on chamber and vocal works in a more modern style reminiscent of Debussy, Hindemith and Prokofiev, which also became increasingly influenced by jazz. His later works from 1945 to 1947 were exclusively shorter and often jazz inspired works for solo piano. He performed these beautifully crafted concert pieces in recitals throughout New Zealand and Australia. After Diny passed away in 1987, their son Hans donated the large collection of manuscripts, published scores and biographical material to the Turnbull Library and National Library of New Zealand.

His archive is held in the Alexander Turnbull Library, and consists of much unpublished material. Amongst the collection are orchestral works, an orchestral song-cycle, and two operas, as well as piano music and arrangements he made for two pianos that formed part of his and Diny’s concert repertoire. Several of his piano pieces were published for the first time in Gillian Bibby’s Living Echoes – The First 150 Years of Piano Music from New Zealand.