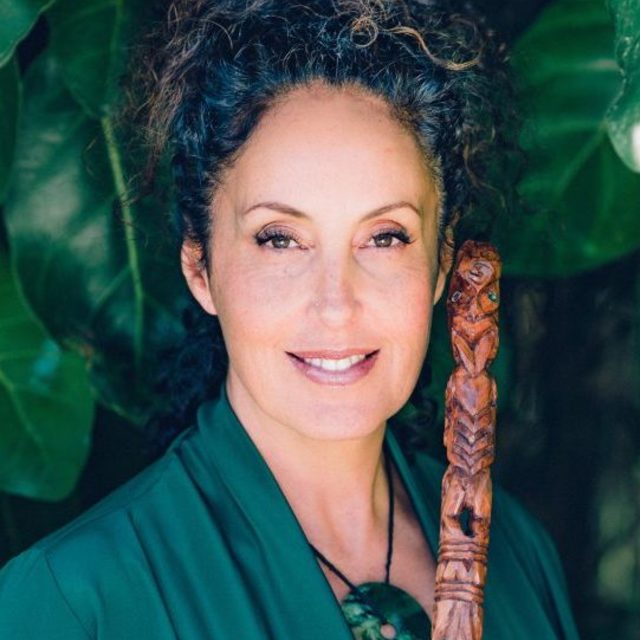 Moana Maniapoto is a Māori composer and singer who has taken her often politically conscious Māori music festivals across the world. Her band Moana and the Moahunters brought Māori music into the NZ Pop industry in the 1990s, later forming Moana and the Tribe in the 2000s. Moana and the Tribe have taken their haka-funk-dub-fusion music to many stages throughout the world, in iplaces such as Istanbul, Moscow, Florence, Berlin, Warsaw, Toronto, Venice, Shanghai, Seoul, Vienna, Toronto, Taipei, Hungary, Switzerland, Norway, Vanuatu and Australia.

Moana became the first non-American to win a major USA based songwriting contest with her song Moko, beating over 11,000 compositions to win the Grand Jury Prize of the International Songwriting Competition. She is a recipient of the New Zealand Order of Merit (MNZM), a Life Time Recipient of the Toi Iho Maori Made Mark (denoting authenticity and quality) and also received the Te Tohu Mahi Hou a Te Waka Toi Award from Te Waka Toi (Creative New Zealand) in recognition of outstanding leadership and contribution to the development of new directions in Maori art. Moana has also received the Art Laureates by the NZ Arts Foundation.

More recently, TŪ (the electronica duo of Paddy Free and Moana) launched itself internationally at festivals in Finland and Taiwan and her acoustic ensemble, My Name is Moana performed throughout the country through Arts on Tour.

Offstage, Moana is one half of an award-winning documentary team led by her partner and band member Toby Mills. Moana has been inducted into the APRA Music Hall of Fame and has received recognition at the Waiata Māori Music Awards. Independent Music NZ also named Tahi (Moana and the Moahunters) as the 2019 recipient of the Classic Record, which aims to acknowledge albums that continue to inspire us.

Back Where We Belong

Bird in a Tree

Fire in Paradise ( feat. Skarra Mucci )
Give It Up Now

I'll Be the One

__This event is cancelled due to COVID-19. See other performance dates below.__ ___ Beloved...