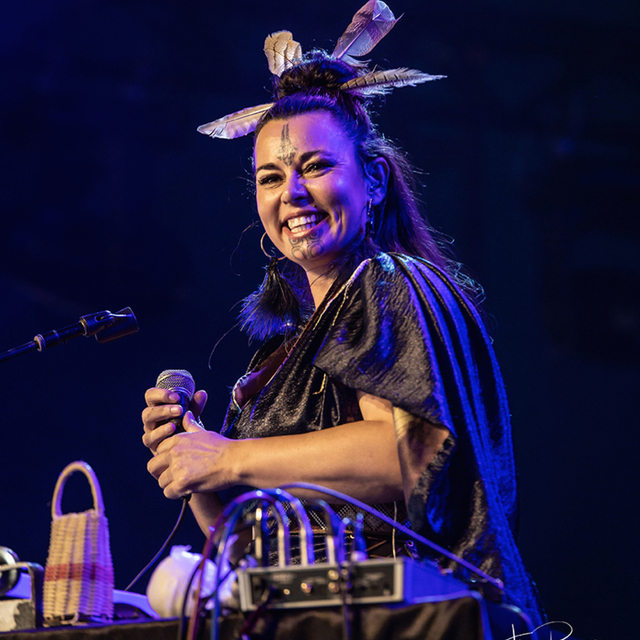 Mihirangi Fleming is a solo artist of contemporary originals and soulful dance world roots with a rare performance style. Creating her own band sound live in front of her audience using a loop pedal, the key to Mihirangi's sound is the layering of her own vocal sounds. From the foundation of fat solid bass lines to intricately layered harmonies, rhythmic ‘ska’ chops, sensuous jazzy riffs and beat-boxing, it's all done with her voice. Also a multi-instrumentalist Mihirangi plays percussion, guitar and traditional Māori instruments.

Renowned for her distinctive vocal style with an extraordinary range of power, expression, vitality and intensity, Mihirangi possesses both feminine tenderness and girl power. An activist and a dream weaver with a confidence and credibility in her natural expression of stagecraft she is a performer who imaginatively reflects the moment.

Having guested with the likes of Lee Scratch Perry, Michael Franti, K’Naan, Salmonella Dub, and The Waifs, Mihirangi has served a rich and diverse musical apprenticeship while her broad talents have infiltrated all levels of the global music scene. She’s sung at the helm of a three-hundred-plus choir, hosted a Māori Haka at the Melbourne International Arts Festival, supported Alice Cooper, and worked in television as host of Noise TV.

In the past three years Mihirangi has been a highlight of the national and international festival circuits. Her unforgettable performances surpassed all expectations and her one-woman show became one of the top selling festival acts. This is why Mihirangi has been the toast of the Canadian, Australian and New Zealand music industries.