June 2011 marks the tenth anniversary of the death of Douglas Lilburn, New Zealand’s most influential composer who worked for 40 years with the School of Music at Victoria University of Wellington. To honour the occasion, the New Zealand School of Music will dedicate their next Friday at 5 concert to his memory.

‘Remembering Lilburn’ will feature three of the composer’s works for strings: his String Quartet, String Trio and Violin Sonata. The performers include violinist Martin Riseley, Head of Strings at NZSM, and Professor Donald Maurice on viola. Doctoral candidate Jun He will play violin in the quartet. The free concert will be presented at 5pm on Friday 10 June in the Ilott Theatre, Wellington Town Hall.

The concert will also be the first public opportunity for audiences to hear two of the NZSM’s newest staff members: Inbal Megiddo, newly appointed lecturer in cello, and Jian Liu, lecturer in piano at NZSM.

“Lilburn occupies a central position in the history of New Zealand music,” says Professor Maurice, NZSM Associate Director. “He has been recognized as the father of 20th century composition in New Zealand, both through his instrumental and vocal music, and through his pioneering work in electronic music. In both genres he worked tirelessly to create a national identity and encouraged similar aims in younger composers.

“His endowment, administered by the Lilburn Trust, has supported many musicians and organisations in their endeavours to further promote and explore a unique New Zealand ‘voice’ in musical performance and creation.”

The Friday at 5 concerts are one hour long, free concerts held ‘downtown’ showcasing the professional musicianship of staff and senior students at the New Zealand School of Music. Future concerts in this series scheduled for 2011 include classical and jazz saxophone ensembles on 15 July, the award-winning NZSM Big Band kicking off the Rugby World Cup on 9 September and the NZSM Brass Ensemble on 7 October. 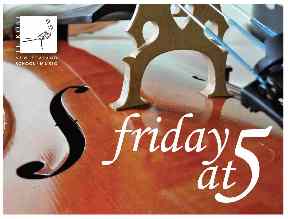 for violin and piano
by Douglas Lilburn in 1950
12m

for string quartet
by Douglas Lilburn in 1946
19m

for violin, viola and cello
by Douglas Lilburn in 1945
17m

Video produced by the NZSM