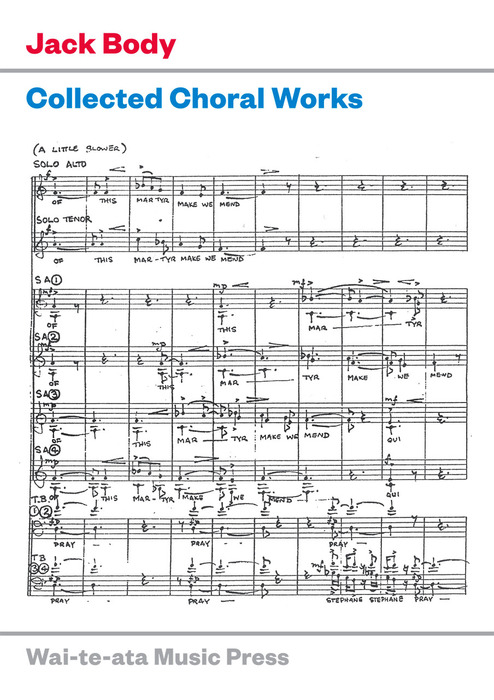 This collected edition brings together thirteen choral works by Jack Body, spanning an almost fifty-year period from 1965–2011. It omits only a few minor student works, as well as his larger choral works that have substantial instrumental accompaniment.

The pieces collected within this edition represent a major contribution to New Zealand choral music, including such iconic works as People Look East and Carol to St Stephen. Body’s choral writing combines elements of the sensual, the sacred and the sacrilegious. His love of non-Western musical cultures permeates many of the harmonies (which often feature the interval of a second), textures (influenced by various non-Western polyphonic practices) and lyrics (often in a foreign or invented language). Furthermore, his interest in the ‘deconstruction’ and recomposition of ‘found objects’, such as fifteenth-century carols, is clearly in evidence in a number of the works.

for soprano, alto and tenor soloists and SATB choir
by Jack Body in 1975
10m

for vocal octet and gongs
by Jack Body in 2008

Nowell (in the Lithuanian manner)

for 4 vocal soloists, choir, percussion, drums and one melody instrument
by Jack Body in 1973
14m

for SSAATTBB choir
by Jack Body in 2011

for SATB choir and percussion
by Jack Body in 1992

for vocal ensemble
by Jack Body in 2010