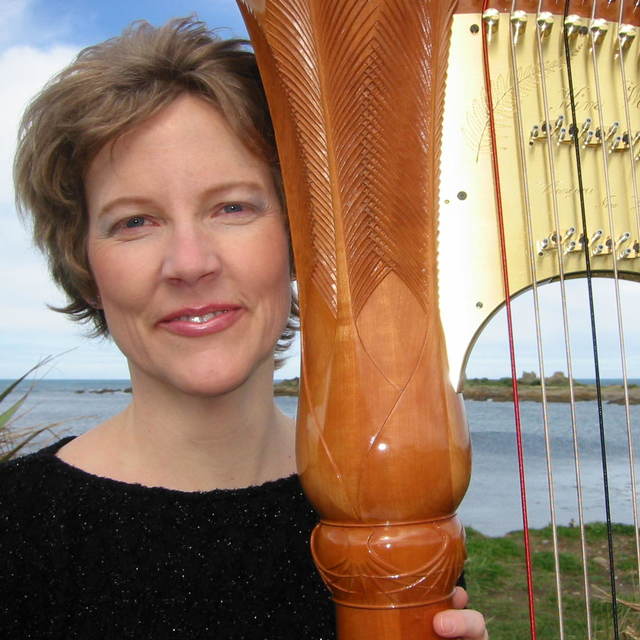 Harpist Carolyn Mills has been described by critics as a musician of “great sensitivity and technical accomplishment” and “intense expressiveness.” She studied in Boston with Lucile Lawrence, winning top prizes in several competitions and playing solo and chamber music concerts throughout the United States. Appointed as Principal Harpist of the New Zealand Symphony Orchestra in 1989, Ms Mills has also played with the Dallas, Fort Worth, and Houston Symphonies, and was Principal Harpist of the Orquesta Sinfonica de Mineria in Mexico City.

Recently, she gave the premiere performances of Kirohirohi, a concerto by Gillian Whitehead, commissioned for her by the New Zealand Symphony Orchestra, and she has also appeared as soloist with many other New Zealand and United States orchestras. Her dedicated work with composers has produced a number of harp solos and chamber works written especially for her, including works by Jack Body, Eve de Castro-Robinson, Kenneth Young, Helen Fisher, and Gareth Farr.

Carolyn has performed in six continents - including Antarctica, when she accepted an engagement as Guest Artist aboard the MV Marco Polo for its 1995-96 Antarctic Voyages. Her CD titles (on the Atoll label) include Song of the Black Swan with violinist Dawn Harms, and Mirage, which quickly reached the NZ Top Ten Classical Chart and was chosen by the NZ Listener as one of the Year's 10 Best Classical Albums of 2002. Recent appearances include a recital in London as part of the Clarsach Society's Harp Festival, a performance and workshop in Adelaide as part of the Australian Harp Festival, and a tour of solo concerts in the Southeastern United States. Carolyn was also an organiser for the first New Zealand Harp Festival, held in Wellington in 2004.

Carolyn is co-founder of Flight, with flautist Bridget Douglas, which has toured in major festivals and series throughout the Pacific region and has commissioned and recorded several new works from distinguished composers.

Ms Mills combines her orchestral, chamber music and solo performances with dozens of school concerts each year. She is Artist-Teacher of Harp at the New Zealand School of Music.

for soprano, clarinet and harp, 10m

Song of the Black Swan - music for violin and harp